Deddington's Millennium Map was launched in November 2000. This ambitious project was three years in the making, and involved a specially commissioned aerial survey, painstaking hand colouring, artistic illustrations, historical research and computer technology. The images are snapshots of Deddington, Clifton and Hempton at the end of the 20th century, and informed by the past. It received an initial loan from the Parish Council; not only was it able to repay this from the proceeds of sales but then went on to make a significant profit which has contributed to the funding of many other parish projects. The full story of this highly successful project is a tribute to the many talents employed from within the Parish.

Full-size facsimiles of the map, measuring roughly 2.5m x 1.5m, are on public view under the Town Hall. The Primary School also has copies and some are  displayed in the Parish Archive in the Windmill Centre. It comprises six panels: Map of Deddington, Fields and Farms of the Parish of Deddington, Clifton, Hempton, History of Deddington, and Ages of Buildings.

The story, "Putting Deddington on the Map" is available as a PDF file here. 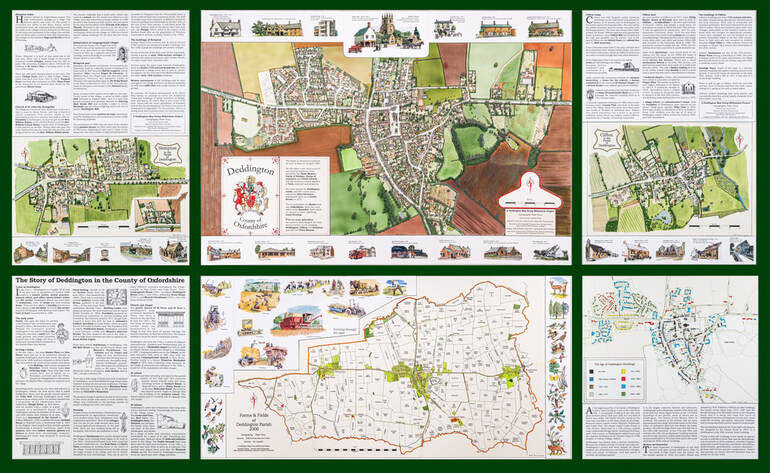